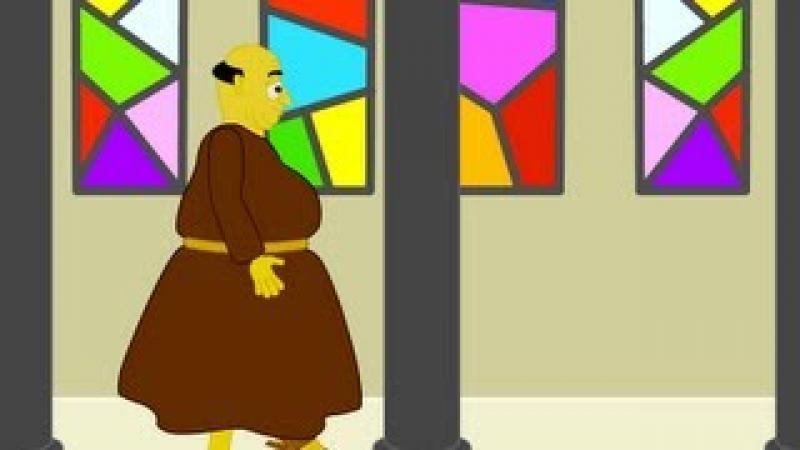 Frère Jacques (English: “Brother John“), is a nursery rhyme of French origin. The rhyme is traditionally sung in a round.

The song is about a friar who has overslept and is urged to wake up and sound the bell for the matins, the midnight or very early morning prayers for which a monk would be expected to wake.


The original French version of the song is as follows:

The song is traditionally translated into English as:

This translation completely distorts the meaning: the whole point is that the bells are not ringing, because brother John, who is supposed to ring them, is sleeping.

A more adequate translation of the French lyrics would be:

In English, the word Friar is derived from the French word frère (“brother” in English), as French was still widely used in official circles in England during the 13th century when the four great orders of Friars started. The French word frère in turn comes from the Latin word frater (which also means “brother”).

A possible connection between Frère Jacques and the 17th century lithotomist Frère Jacques Beaulieu (also known as Frère Jacques Baulot), as claimed by Irvine Loudon and many others, was explored by J. P. Ganem and C. C. Carson without finding any evidence for a connection.

Martine David and A. Marie Delrieu suggest that Frère Jacques might have been created to mock the Dominican monks, known in France as the Jacobin order, for their sloth and comfortable lifestyles.

In a review of a book about Kozma Prutkov, Richard Gregg notes it has been claimed that Frère Jacques Frère Jacques was derived from a Russian seminary song about a “Father Theofil”.

Nursery Rhyme Categories:
Nursery Rhymes
Published:
Language:
English
Place of Origin:
England
"Bobby Shafto's Gone to Sea" or "Bobby Shafto" is an English nursery rhyme. The song is said to relate the story of how he broke the heart of Bridget Belasyse of Brancepeth Castle.
View Rhyme

Nursery Rhyme Categories:
Clapping
Nursery Rhymes
Language:
English
Place of Origin:
N/A
“Miss Mary Mack” (“Mary Mack”) is a clapping game played by children in English-speaking countries. It is known in various parts of the United States, Australia, Canada, and in New Zealand and has been called “the most common hand-clapping game in the English-speaking world”.
View Rhyme

Nursery Rhyme Categories:
Rounds
Nursery Rhymes
Lullabies
Published:
Language:
English
Place of Origin:
USA
“Row, Row, Row Your Boat” is an English language nursery rhyme and a popular children’s song. It can also be an “action” nursery rhyme, whose singers sit opposite one another and “row” forwards and backwards with joined hands.
View Rhyme

Frère Jacques (English: “Brother John“), is a nursery rhyme of French origin. The rhyme is traditionally sung in a round.